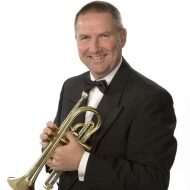 This user has not added any information to their profile yet.

Having served several top class bands as Principal Cornet including Grimethorpe Colliery and Brighouse & Rastrick, Alan has now retired from front line playing and conducting but continues to adjudicate at all levels. During his career as a freelance musician he made worldwide appearances as an adjudicator, soloist and conductor having performed in Australia several times, extensively in Europe and the USA as well as the length and breadth of Great Britain featuring in many festivals and gala concerts including the Henry Wood Promenade Concerts at the Royal Albert Hall. Over the years Alan has been involved in the promotion and coaching of many young people and youth bands including the National Youth Bands of Switzerland and Great Britain and in 2006 he was the Guest Conductor of the European Youth Band at its course in Belfast. For over 10 years he was the Professional Musical Adviser to the all-conquering Camborne Youth Band who won 10 National Youth Band titles. Alan was an ABRSM examiner for 25 years and during his career visited many educational establishments undertaking recitals, masterclasses and external examining. He has adjudicated brass band contests at all levels at home and abroad, including the National Championships of Great Britain, Australia, New Zealand, Switzerland, Sweden, Belgium, the US Open and European Championships and has adjudicated the National Finals at the Royal Albert Hall several times. Alan has recorded seven solo albums and pioneered a teaching video that has proven very successful. He also regularly features on light music recordings for the BBC with various ensembles including big bands and orchestras. There are many compositions and arrangements published for brass band by Alan that have also proven very popular and all are still available, some of the titles becoming best sellers, such as Buster Strikes Back and Sugar Blues.

Each month The Association of Brass Band Adjudicators will present a featured adjudicator. This month it is James Holt.

The Association of Brass Band Adjudicators (AoBBA) has announced a new adjudicator successfully becoming a full member alongside one new trainee member in its ranks. …

The Association of Brass Band Adjudicators (AoBBA) has announced the appointment of Brett Baker as Vice-Chair of the organisation. The international trombone soloist has gained …

©2022 The Association of Brass Band Adjudicators. All Rights Reserved | Made by JKE Web Design