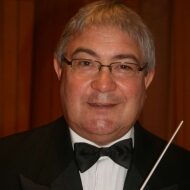 This user has not added any information to their profile yet.

Dr. Robert Childs is a leading figure in the world of brass music. For over thirty years he has performed at the highest level giving solo performances in many of the world’s most prestigious venues. He has given masterclasses throughout Europe’s finest conservatoires and is now recognised as a leading education specialist within his field. In 2000 Robert relinquished his position as principal euphonium with Black Dyke Band in order to become the Musical Director Conductor of Cory Band. During his tenure with Cory, the band won the World Brass Band Championships, National Brass Band Championships of Great Britain, Brass in Concert Championship, British Open Championships (three times), European Brass Band Championships (three times), Welsh Regional Championships (seven times) and led the Band to the No.1 position in the official World Rankings. In 2002 Robert was awarded a Doctorate in Musical Arts from the University of Salford and is also an Associate of The Royal College of Music and Fellow of The London College of Music. Robert gained a Masters Degree with distinction from University of Leeds, holds a Post Graduate Certificate in Education from the Open University and in 2007 his remarkable achievements were recognized by the Worshipful Company of Musicians when he was awarded the prestigious Iles Medal. In 2008 Robert was given ‘Freedom of the City of London’ and also received the prestigious John Edwards Memorial Award by the Welsh Music Guild for outstanding contribution to Welsh Music. Recently he was awared the Certificate of Excellent from Butlins Championship for services to brass bands Robert is currently Director of Brass Band Studies at the Royal Welsh College of Music, Chairman of the NYBBGB, advisor to the Harry Mortimer Trust and Managing Director of Performing Arts Education.

Each month The Association of Brass Band Adjudicators will present a featured adjudicator. This month it is James Holt.

The Association of Brass Band Adjudicators (AoBBA) has announced a new adjudicator successfully becoming a full member alongside one new trainee member in its ranks. …

The Association of Brass Band Adjudicators (AoBBA) has announced the appointment of Brett Baker as Vice-Chair of the organisation. The international trombone soloist has gained …

©2022 The Association of Brass Band Adjudicators. All Rights Reserved | Made by JKE Web Design